FOAG, Federal Office for Agriculture, collects data on the animal diseases in Switzerland. This data is published as Linked Data.

This notebook requires Python 3.9 or later to run.

Reports on animal diseases are published as Linked Data. It can be accessed with SPARQL queries.
You can send queries using HTTP requests. The API endpoint is https://lindas.admin.ch/query/.

Animal diseases are closely linked to places. To understand their location, we will work with Swiss geodata. It is published as Linked Data. It can be accessed using API endpoint under https://ld.geo.admin.ch/query.

Let's use SparqlClient from graphly to communicate with both databases. Graphly will allow us to:

SPARQL queries can become very long. To improve the readibility, we will work wih prefixes.

Using the add_prefixes method, we can define persistent prefixes. Every time you send a query, graphly will now automatically add the prefixes for you.

Our goal is to understand outbreaks of animal diseases. First, let's take a look at the animals found in our dataset.

Now, let's take a look at the diseases the animals can suffer from.

Can we link disease to animal type?¶

When animals get sick, the farmer will typically consult a vet. After diagnosis, the incident is reported to the Federal Office for Agriculture. This data is publicly available and can be found in our endpoint:

The reports give us many details. It tells us not only what specie was affected, but also how many animals got sick, infected, or deceased.

These reports, however, have one limitation. They are sent only once per incident. If a goat gets sick, the vet will examine the entire herd. S/he will check how many goats are sick, or infected. S/he may recommend killing parts or the entire herd. The farmer, or the vet, will then report how many aniamls were sick, infected, killed, or deceased.

But that will happen only once. Nobody will examine this herd again, be it the same week or later. Hence we do not know how a given disease evolved. A seemingly insignificant report may turn out to be a serious issue a few days later. We also do not know at which point in time the report was made. Was it a day, two or ten after the first infection?

The data from the reports raises many questions. To address them, we will work with number of reports. Instead of looking at how individual farms were affected, we will simply count how many farms reported health issues.

We have seen that one animal can suffer from many diseases. Remember the animal-disease graph? A goat can get sick of twenty different diseases! 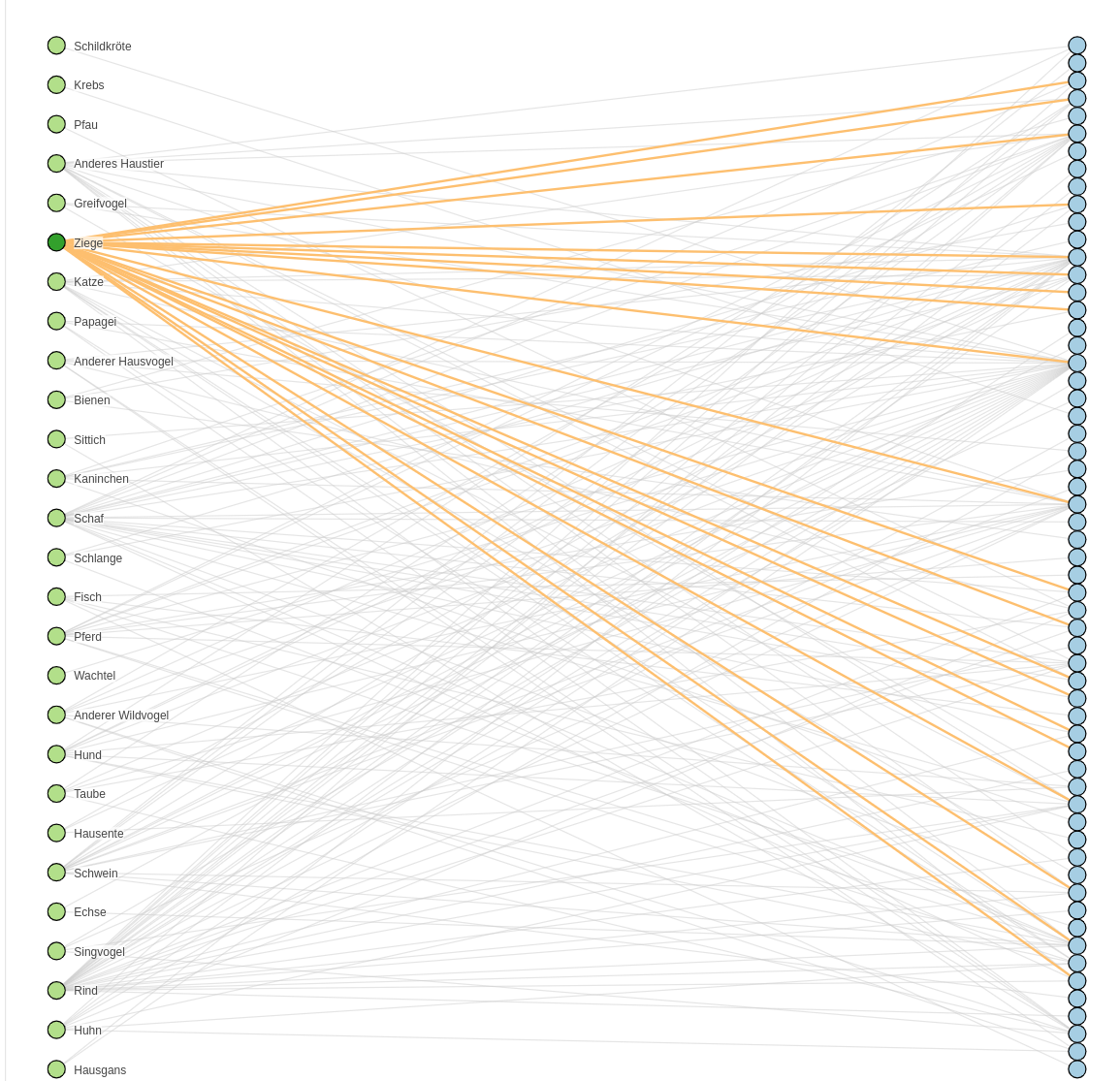 Some of them are more serious than others. Which ones were the most often reported in the past?